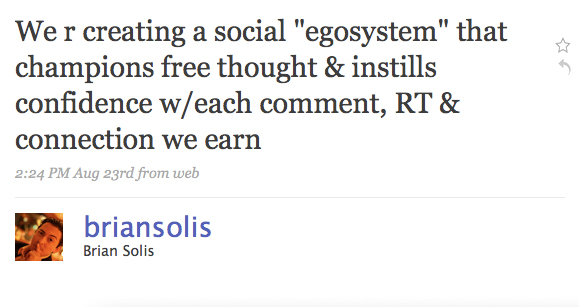 As you might imagine, at first many people were confused and assumed Brian mean “ecosystem.”  But, in fact, he hadn’t erred.  Nope. He actually meant to type “egosystem.”  I find this fascinating, because the one single truth that 99% of people refuse to acknowledge is that social media has nothing to do with “adding value,” “conversations” or “engagement.”  None of those things really matter.  What social media is all about though, is EGO.  To quote Al Pacino from The Devil’s Advocate, “Vanity is definitely my favorite sin. So basic. Self-love. The all-natural opiate.” That’s what social media is all about.

The rise of social media has simply given everybody the ability to stroke their own ego in public. And let’s be honest, it’s no fun stroking your ego in the comforts of your own home and without an audience.

This isn’t a brand new concept. Years ago I worked on Hallmark. We wanted to understand the emotional reason that people bought and sent Hallmark cards. After months of research, it became clear that the real reason people bought and sent Hallmark cards was they wanted CREDIT. It wasn’t about doing something nice for your fellow man, friend, family member, or colleague. No, it wasn’t something that nice. It was all about them wanting to have you owe them. Think about it. If I send you a birthday card, sure it makes you feel good, but it also makes you say, “wow, that was really thoughtful of Adam, I’ll make sure I send him one too.” If the card was really thoughtful and unexpected you’ll even share it with other people – which simply grows my stature in their eyes.

Kinda makes you feel a little dirty huh? Well guess what? Social media is the same thing. People add value on twitter so that they can grow their followers and get that all mighty re-tweet. They offer helpful advice on their site, because they want traffic, want their site to be “dugg” and passed on. Trust me, it’s all about the means justifying the ends. And in this case the ends are things like money and speaking invites. Having met a lot of the so-called leaders in this space in person I can tell you I’m unimpressed. Maybe my standards are too high. But, for people that are supposed to be about providing value and engaging in conversations – they certainly come across as ego-centric broadcasters (no two way conversation).

I encourage you not to feed these people. If you do, you’re simply growing the giant social ego system.