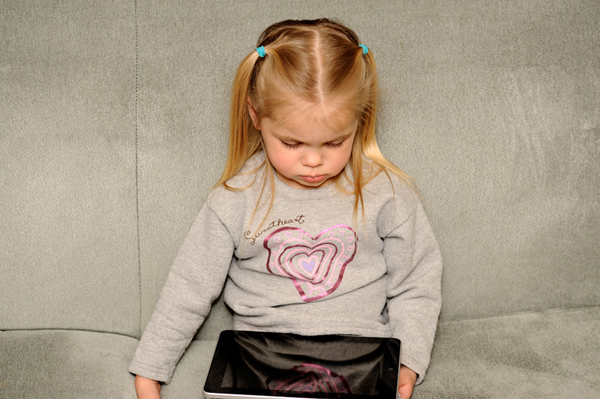 I bought my nearly 3 year old daughter an iPad this morning.  Yeap, I walked right up to the Apple Store at the Mall of America and waited behind 6 other people to purchase the iPad.  She loves it.  She absolutely loves the iPad.  Since the moment I placed it in her hands she hasn’t put it down.

Is the iPad a killer device?  Is it a game changing device?  Will you love it?  The simple answer is YES…so long as you have the mindset of a 3 year old.  Harsh?  Yes.  But, it’s the truth.  Let me break it down.

Do you like a linear approach for doing things?  If so, the iPad is perfect for you.  Everything about the iPad interface is linear.  Every desired final action is accomplished through a series of taps.  Want to read a book?  Cool.  Tap the home button.  Tap the iBook app.  Tap the library view.  Tap the book you want to read.  Hopefully, you’re getting the point.  Some will call this brilliant.  I call it rudimentary and lacking, especially when you consider that you’ll be doing a lot of tapping since there is STILL no multi-tasking functionality.  Yes, just like the iPhone, you can’t switch between apps.  If you’re watching a movie and want to tweet a comment about it, you’ll need to exit the movie app, switch to the twitter app, tweet away, close the twitter app, re-launch the movie app, tap to resume the movie…etc.  We’re on the 3rd evolution of the iPhone and the 1st evolution of the iPad…and we still have NO multi-tasking capabilities.

The iPad, by design (weight, size, etc.) competes directly against netbooks.  You’ll find that that iPad costs significantly more than most netbooks, but lacks basic computing features that have been around for more than 20 years.  For example, you will not be able to create folders, move files between folders, rename files, edit files, upload a file, download a file, etc.  Sad.  Remember when I said it lacks features that even the iPhone 3Gs has?  Well, the big one is and integrated camera.  The iPad was tailor made for video conferencing, video streaming, video chatting, etc.  But, Apple opted to eliminate this feature.  Ugh.

The screen is beautiful, bright, vibrant, full of rich colors and a joy to look at it.  Unless of course you’ve used it for more than a minute.  Just like an iPhone you’ll find yourself wanting/needing to clean the screen every 10 minutes.  Except, unlike the iPhone, you won’t be using your shirt or pants to do so 🙂  Oh, and unlike the iPhone, Apple opted NOT to include a screen cleaner.  Just lame.

Sounds coming from the built-in speakers are acceptable.  They’re no substitute for your computer speakers, headphones, or home theater.  But, they do the job when it’s quiet.  However, when my nearly one year old was in the room creating more ambient noise, it was difficult to clearly hear the dialog in the movie Coraline.  Keep in mind, this was when the speakers were turned all the way up.

Apple talks about the size of the iPad as a positive feature.  I agree and disagree.  Is the the iPad sleek?  Yes!  Is it thin?  You bet!  Is it contoured nicely?  Yeaper!  But, it’s still large and not portable by any stretch of the imagination.  You won’t be grabbing for your iPad every time you’re headed out.  That’s an unrealistic expectation anyway.  But, even if you’re a traveler, like me, you’ll think twice.  Why?  Because you’re already traveling with your iPhone (or in my case a Nexus One) and your laptop.  Do you really need both of those and a iPad on the plane?  Can you imagine having yet another item to get through the airport security line?  Oyve!

As a substitute for a book, I find it lacking.  Here’s why. One, you’d never read with it by the pool because the outside light is too blinding and you can’t get the iPad wet.  Two, you’d never read with it in the tub because just as with a pool, you don’t want to get it wet.  Three, would you really take it into the bathroom to read like the 71% of people who indicated they read in the bathroom?  I didn’t think so.  All that aside, the most maddening thing is their are simply way too many options for books on the iPad.  This is a true example of the Paradox of Choice.  Seriously.  You have your Kindle books.  You have your iBooks.  You have 3rd party books like the Cat in The Hat that sit on the screen like apps.  You also have content category aggregator apps like the Marvel Comic Book app.  Each of these apps requires you to have a unique login and each manages the content purchased in that app separately from the rest of the apps.  What does that mean?  That means there is no ONE app to see ALL your books.  You need to manage book libraries across multiple apps.  Add in magazine and newspaper apps and you have chaos.

One of the coolest features of the iPad unfortunately requires a $29.99 adaptor.  You can setup the iPad to be a digital picture frame.  I love this idea especially when you consider the cost of many high quality digital picture frames.  But, requiring an incremental $29.99 investment is just adding insult to injury.

No USB, no camera, no replaceable battery, no ability to create content and heck no cleaning cloth.  I could deal with all of these shortcomings and flaws if the price was something like $349.99 (in line with iPod Touch), but not at $499.99 (minimum).  At $349.99 it would be a nice affordable stretch and step up from an iPod and complimentary to a laptop.  But, at $499.99 I just don’t see how a current iPhone or MabBook user will find value in a device that does less than both of those devices.

This of course begs the question, why did I buy one?  Two reasons.  One, my job and why I’m good at it, is to be on and ahead of trend.  I need to understand what technology can do, can’t do, will do and might do for our clients.  Having an iPad in the house will help me do that.  Two, I genuinely believe as FastCompany does, that kids today will benefit from tools like the iPad.

Let’s just be honest for a second.  What need does the iPad deliver on?  What consumer problem does it solve?  The answer to both is nothing.  It’s essentially a bright shiny Apple object and that’s exactly why you’ll buy it.  However, what I think you’ll find is that just like so many other bright shiny objects, you’ll be bored with it fairly quickly.  Unless of course you’re a 3 year old; then you’ll love it and never want to put it down.

UPDATED: April 5, 2010
Is my review harsh? Possibly. Is it fair? Absolutely. I thought you might want to check out what some other industry leaders, who aren’t blinded by the bright shiny Apply object syndrome, had to say about the iPad.

Dave Winer
“Today it’s something to play with, not something to use. That’s the kind way to say it. The direct way: It’s a toy.”

Jeff Jarvis
“I tweeted earlier that after having slept with her (Ms. iPad), I woke up with morning-after regrets. She’s sweet and pretty but shallow and vapid.” and “The iPad is retrograde. It tries to turn us back into an audience again. That is why media companies and advertisers are embracing it so fervently, because they think it returns us all to their good old days when we just consumed, we didn’t create, when they controlled our media experience and business models and we came to them.”

BusinessWeek
“People who predicted that the iPad would kill the market for dedicated E-Ink readers are dead wrong. If anything, the iPad is the amazing, magical device that proves the value of E-Ink.

Don’t believe me? Take an iPad to the beach someday and try to spend the afternoon reading. You’ll be lucky if you can see around your own reflection long enough to finish a paragraph of text.”

David Pogue
“There’s no multitasking, either. It’s one app at a time, just like on the iPhone. Plus no U.S.B. jacks and no camera. Bye-bye, Skype video chats. You know Apple is just leaving stuff out for next year’s model.

The bottom line is that you can get a laptop for much less money — with a full keyboard, DVD drive, U.S.B. jacks, camera-card slot, camera, the works. Besides: If you’ve already got a laptop and a smartphone, who’s going to carry around a third machine?”